Many people see killifish as the orchids of the aquarium world. While it’s true that they have orchid-like colors, they are generally pretty easy fish to keep.

If we are looking at “reasonable” micro-tanks of 5 gallons / 20 liters, you can easily put a trio of these beauties in one. Why only three? It’s a micro-tank, and despite sketchy advice you may have been given, fish need room to live. If overcrowded in a small tank, they will be more susceptible to disease, aggression and water quality issues. 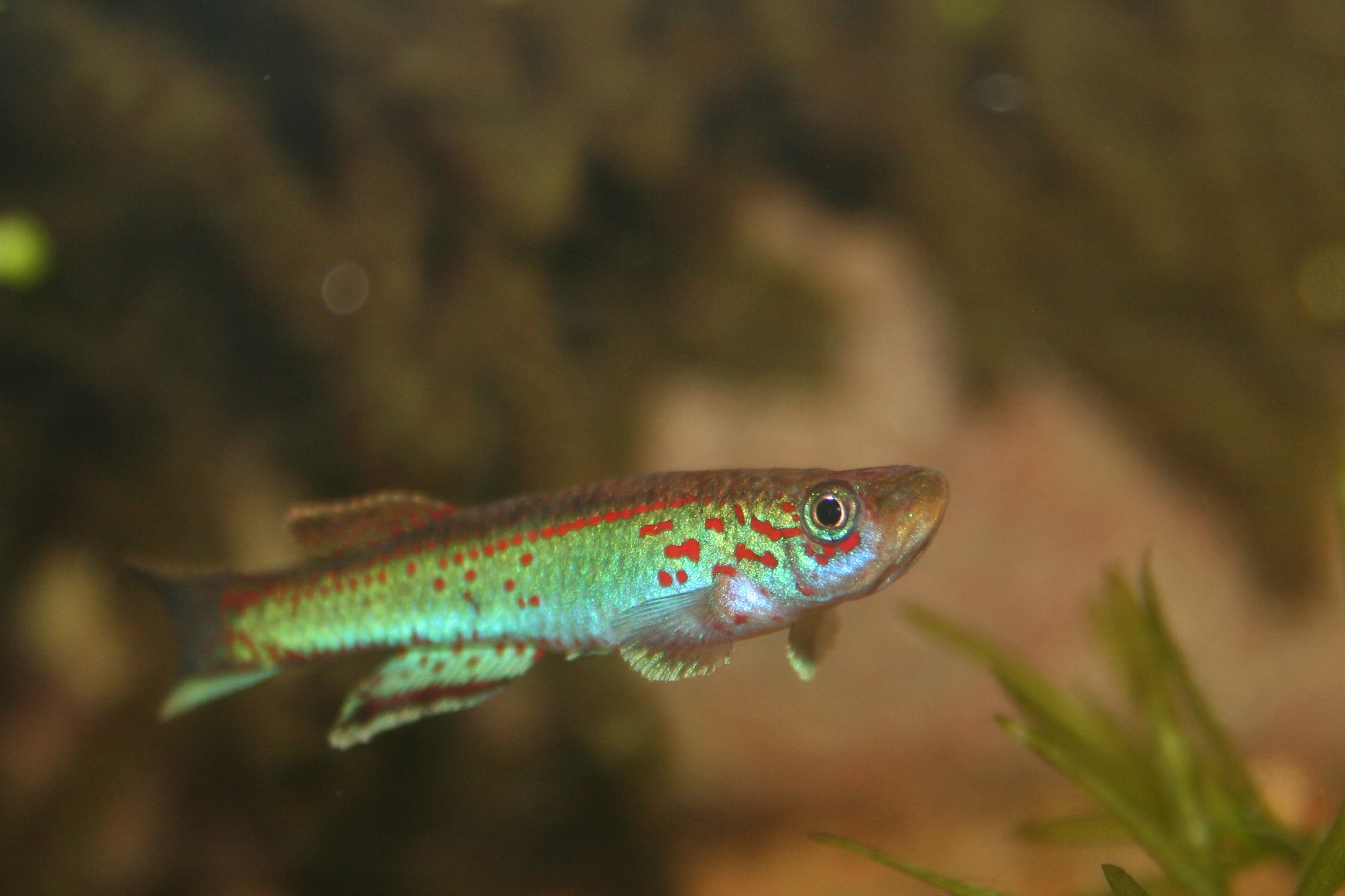 What else do you need? An air-driven filter (sponge filters are good) and a tight cover. I would add some slow growing plants (remember the tank size – plants need room too). Many species of Cryptocoryne planted in sand or gravel will thrive without extra fertilization or intense light. The same is true for Anubias nana, a small, tough plant which has to be attached to pieces of wood or rock, with its roots out to filter nutrients from the water. Put in some java moss, and you will have an eye pleasing, low tech tank. With the weekly 25 to 30% water changes every fish tank needs, you’re in business.

Did I mention standard lighting? Low tech tanks are also inexpensive to run.

The lid is essential though, as killies jump, and no one (except your cat) wants to find crispy killies on the floor.

The accompanying video looked at Aphyosemion killifish, colorful rainforest dwellers from the west side of equatorial Africa. These are not the only small, micro-tank appropriate killies from Africa. Older, out of date texts mention Aphyosemion gardneri, a stunning fish that does show up in better pet stores. If you look them up, the species is no longer considered as an Aphyosemion, but rather a Fundulopanchax. 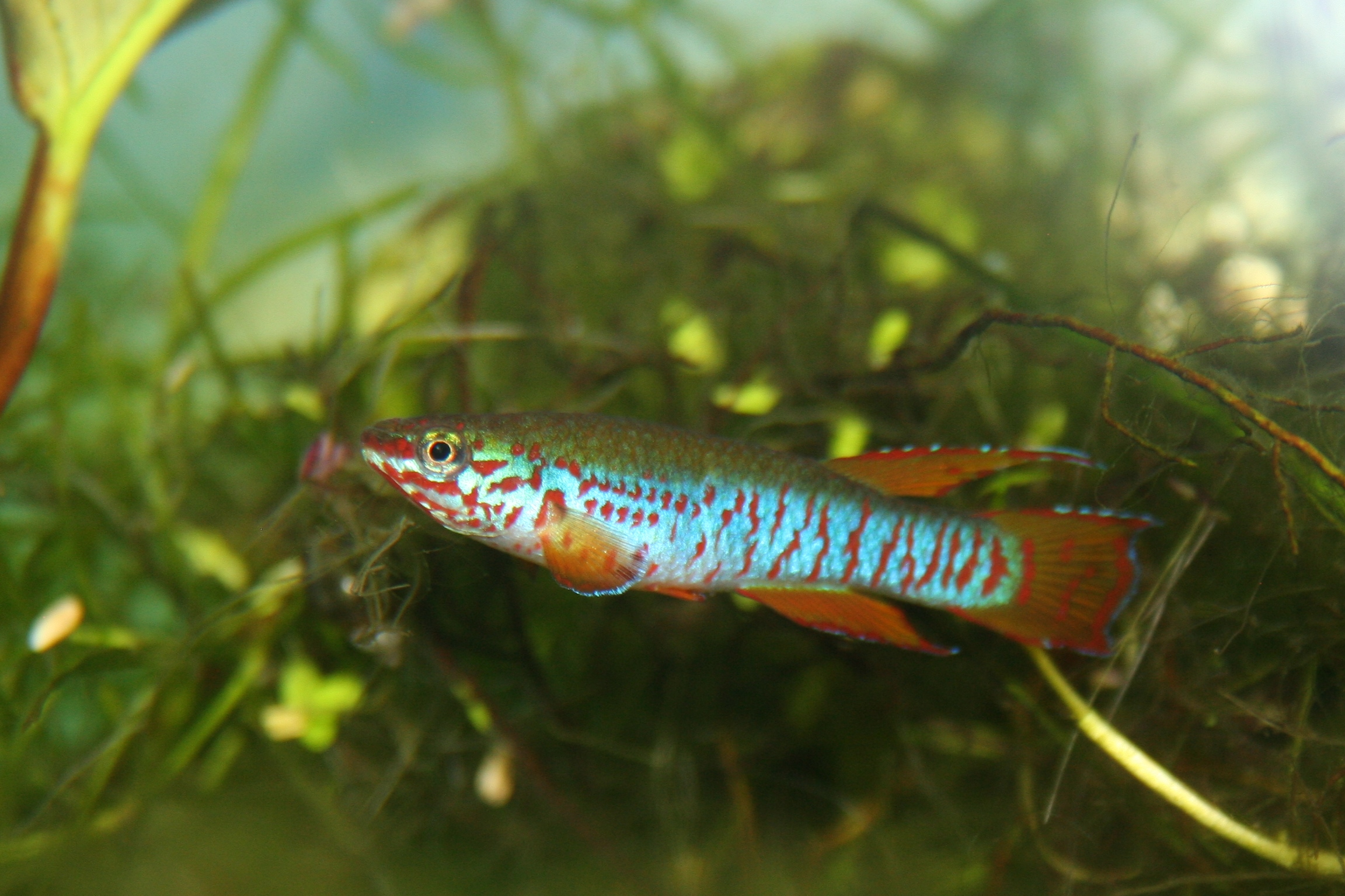 There are also a few attractive, surface-loving pike killies of the genus Epiplatys.

Aphyosemion australe was our first video fish. These are sometimes available in pet stores. They are a rare type of Aphyosemion – a golden mutation that breeders selected 50 or more years ago. The blue and brown (chocolate australe) wild forms are also beautiful creatures to behold. If the killifish bug hits you and you want more of them, they are easy to breed as well.

After australe though, the killies you saw in the video are all harder to find. You can buy them from online auction sites, or through the American or European killie clubs. Just as you’ll have to do a little reading to find out which plants won’t outgrow a micro-tank, unless you’ve found local killie breeders or a regional club, you’ll have to look up and track down the species that appeal to you. Consider it like a treasure hunt.

We had a couple of glimpses of Aphyosemion dargei in the video. The dargei males were young, and a bit intimidated by the older, larger fish showing off for the camera. This little fish is part of a closely related group of similar species, including A. elberti and the tiny A. exiguum. If you like rich tones of blue, contrasting with red and sometimes yellow, they are well worth exploring. You may even just want to drool over online photos.

Aphyosemion ottogartneri showed its yellow fins off. They have a striped, connected dots pattern that’s common among many Aphyosemion species. One of the young male movie stars you saw had gotten into a minor fight (that photo 2.5 gallon / 10 liter tank was temporarily way overcrowded) and he shows a tiny bite mark on his head. Don’t worry, he recovered quickly and is back doing his own stunt work.

I have a large group in a fair-sized tank, and the many males get along just fine when you offer them room to move.

Last but not least, viewers saw Aphyosemion bitaeniatum, from the edges of the gigantic urban area of Lagos in Nigeria. These fish are gems, and their long, burnt orange to red fins are perfectly natural. They aren’t like a breeder modified Betta splendens that barely resembles its wild ancestors, or even the golden australe who appear beside them. I’ve seen these fish in the bag right off the plane from Africa, and they looked the same as the ones we breed. They really are something to marvel at. Their constant showy dance-offs are a treat for aquarists who want their micro-tanks to be a little slice of nature. 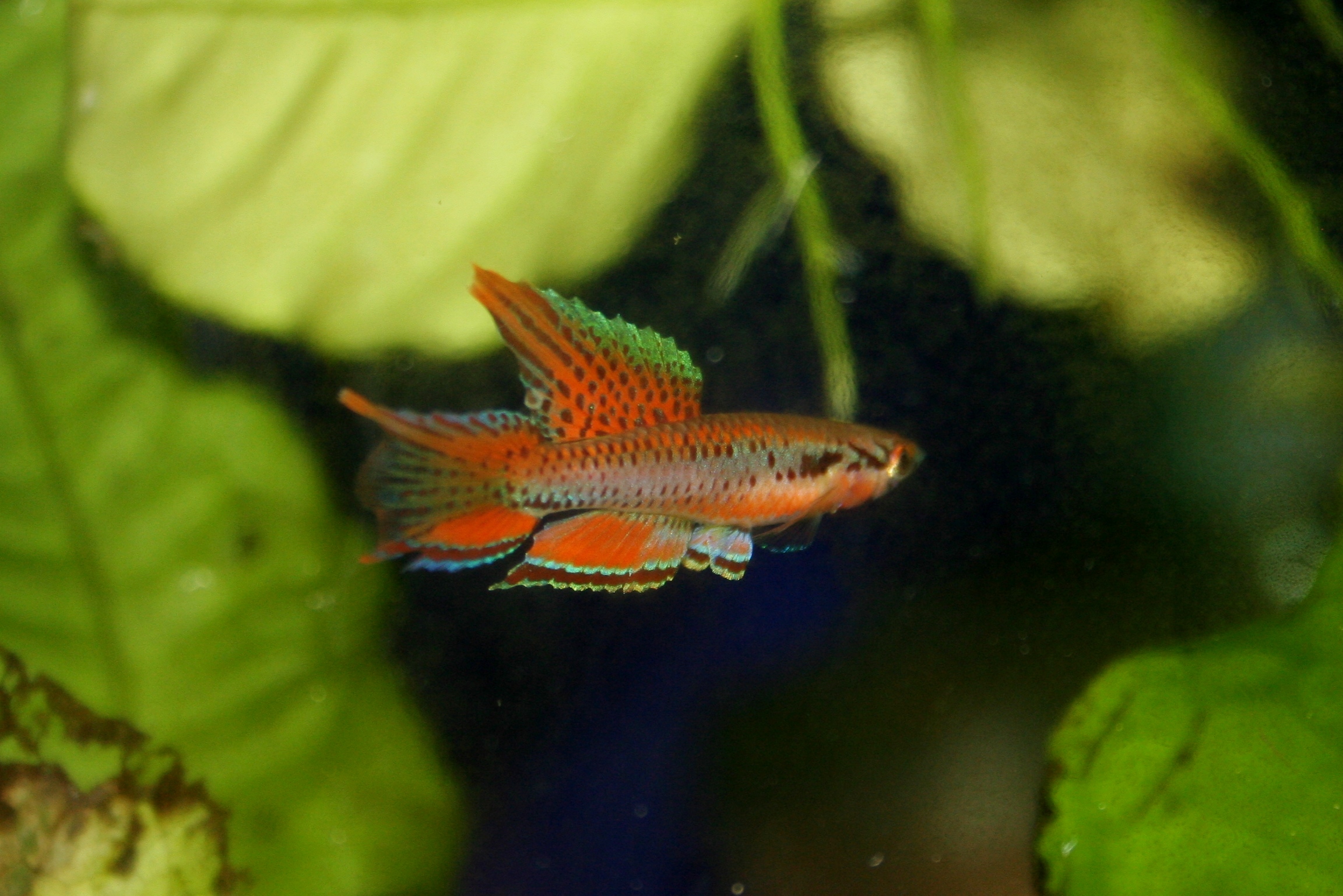 The many two striped species like A. bitaeniatum may be moved to the genus Chromaphyosemion soon. This matters because if you want high quality online information on any fish, you’re always best to search by the Latin name.

Most Aphyosemion females look very similar, no matter the species, so if you go to the size limits of the small tank world (a 10 gallon / 40 liter tank) and want several species, it’s hard to keep two species together without the danger of mixing them up.

Chromaphyosemion females have the same distinctive dark striping as the males – and I have never known them to interbreed with the usual Aphyosemion species. They open up the possibility of keeping bitaeniatum (or the more common in pet stores bivittatum) in with a pair of fish like the others discussed above. For that setup, you’d also have to push the micro-tank limits to at least 10 gallons / 40 liters.

This hobby is all about beauty and diversity. Aphyosemion has both, and can lead you to a lot of learning, if you’re the curious sort.

In a future video, we’ll have a look at some of the other, very different smaller killies in the hobby. Some will be annuals, the legendary short-lived beauties of East Africa and South America. The killifish family extends from the Canadian river at the end of my street through Central America, South America, southern Europe, the rainforests of Africa, the savannahs of east Africa, and streams in Asia and Madagascar. There are even species found in Middle Eastern desert oases.

They all have quite a story to tell. It all starts with simply looking at something very beautiful.