Freshwater angelfish are one of most commonly kept tropical fish, and are fundamentally important in increasing the popularity of fishkeeping.

The angelfish consists of 3 species of the genus Pterophyllum: scalare, leopoldi, and altum. They originate from two massive watersheds in South America, the Amazon and the Orinoco, but can be found throughout the Guiana shield as well. Of the 3 species, P. altum is the most distinct and, until recently, was considered the most difficult to keep healthy long term, particularly if wild caught. P. leopoldi is quite uncommon in the fishkeeping hobby and won’t be discussed further in this article. 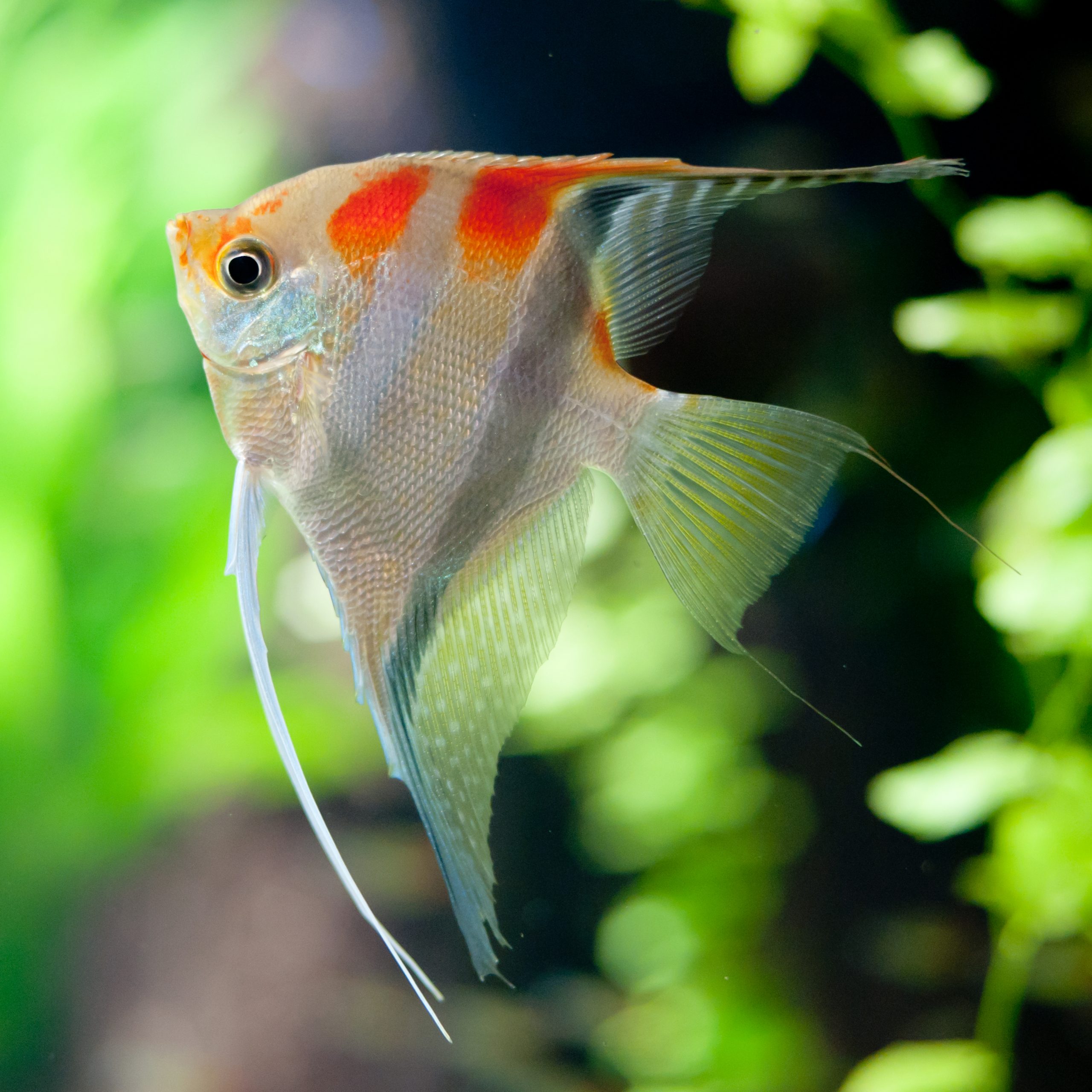 Fish behavior and reproduction is what has kept many observers glued to the front pane of aquariums for decades. Territorial, courtship, spawning, feeding, pecking order establishment and others are all very interesting, diverse behaviors to observe. That said, raising a group of 6 young angelfish in a 50 US Gal / 200 L aquarium will provide interesting demonstrations of all the behaviors mentioned above.

The angelfish is a relatively gentle fish, especially when compared to some of the larger South American cichlid varieties. It is also a relatively good community fish when kept in the right sized, properly set up aquarium, making them good tankmates for a wide variety of species.

There is some variation in the relative sizes of angelfish, with the largest being P. altum. In the aquarium, one can expect P. altum to reach a height of approximately 9” / 23 cm and a length of 7” / 18 cm: this is not a small fish, and with those dimensions tall tanks are a must (minimum 24” / 60 cm in height). The minimum tank size for keeping a group of P. altum ranges from 15-20 US Gal / 60-80 L per fish. It is a more challenging species to keep, but there are now breeders who offer F1 domestically-bred specimens. They are still a difficult find, but if you are up to the challenge P. altum truly is a magnificent tropical fish to keep and admire.

P. scalare is less demanding and not as large as P. altum. It reaches a height of approximately 7” / 18 cm and a length of 5” / 13 cm – this is still not a small fish, though, and requires a minimum of 7.5-10 US Gal / 30-40 L per fish when housing a group together. The body sizes mentioned above for both P. altum and P. scalare are maximum expectations, which would only be achieved in larger tanks with ideal feeding and care.

Angelfish originate from softer, acidic water, and as such prefer those conditions. However, they are hardy fish and can thrive at slightly higher pH and hardness values as well. In general, a pH range of 6.2 to 6.8 and a KH of 3 to 5 degrees is recommended. For wild angels, having access to R/O water to create soft water conditions is beneficial, especially for P. altum. All angelfish benefit from the use of aquarium peat as it imparts a natural amber tint to the water, which is relaxing for the fish thanks to the tannins released and is beneficial for spawning purposes as well.

Tropical sea almond leaves (Terminalia catappa) are also recommended, as they too release tannins that benefit angelfish. The use of these leaves with wild P. altum is strongly recommended. 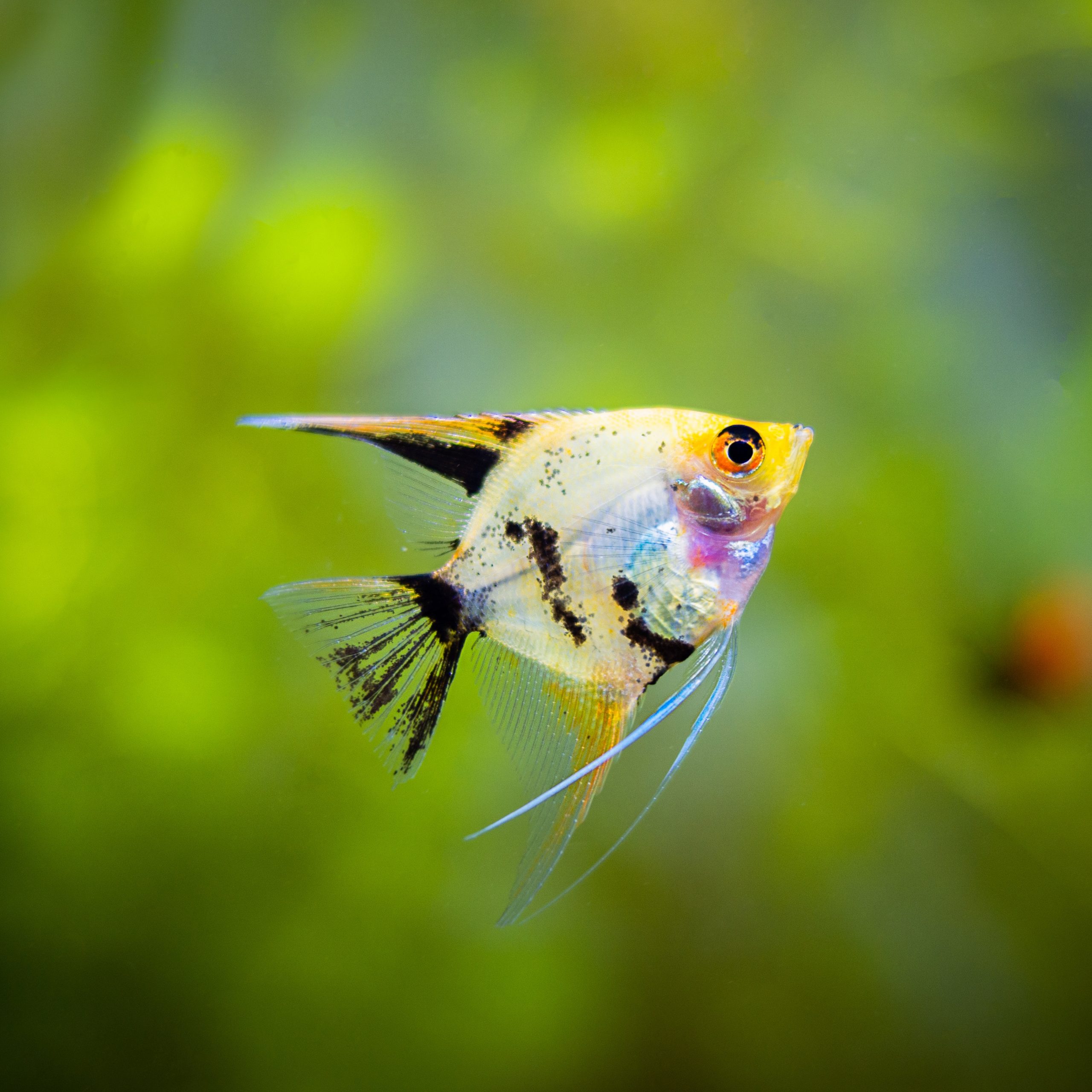 Fine white sand is an ideal substrate to use with angelfish. Live plants are recommended: include some broad leaf varieties such as various species of Echinodorus sword plants, as they tolerate warmer temperatures and grow well in low to mid light levels, which will be the case when peat is used.

The structure should include some submerged driftwood that is arranged to provide some vertical height: this will provide the fish with a greater level of security, as well as providing natural spawning sites. Arranging branch driftwood to enter from the top into the aquarium is also a great idea for these fish, as it mimics the overhanging structure that would typically exist in their natural habitats.

Taller aquariums are better choices for angelfish due to their overall height being greater than their length. This type of aquarium is also more suited to the type of structure and plants they prefer. A group of 6 young angels can grow to maturity in a 50-75 US Gal / 200-300 L aquarium.

Angels are carnivores and, like all tropical fish, should be fed a variety of foods. Domestic fish are not fussy and are usually aggressive feeders. Offering high-quality flakes and pellets, along with a couple of frozen food types, is recommended. If possible, offering some live food from time to time is highly beneficial. Once the fish are mature, feeding them some small live red worms will have them in spawning condition very quickly.

Wild fish, especially P. altum, usually require live and frozen foods during acclimation. In general, however, they can gradually be weaned onto dry foods. 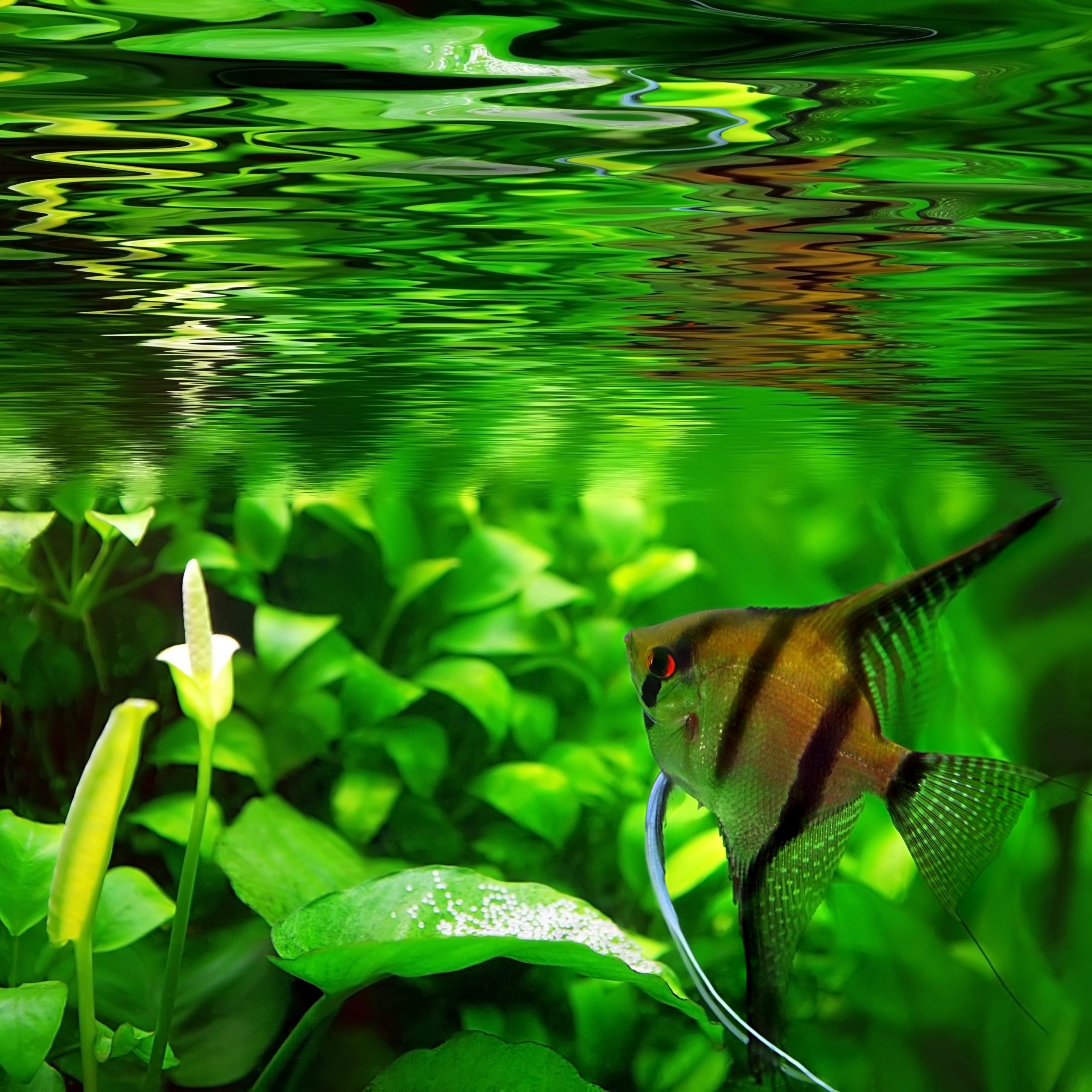 Unlike many larger, more belligerent cichlid species, the angelfish allows for many tankmate options in a planted community tank setting. Ideal tankmates for angelfish include other South American species that are not too aggressive, but large enough that an adult angel cannot eat them. Groups of mid-sized tetras such as Bleeding Heart tetras, Emperor tetras, and Buenos Aires tetras are good examples. Corydoras catfish, smaller suckermouth catfish, and peaceful dwarf cichlids are usually fine as well. Mid-sized rasboras, gouramis and livebearers such as swordtails and platys are also suitable choices.

Angelfish are easy to reproduce in the aquarium. The best method involves growing 6 to 8 fish together and allowing them to pair off when they are ready to breed.

Once a pair has formed, they will clean a prospective breeding site on a vertical surface somewhere in the tank. Often it is large plant leaf, a vertical piece of driftwood or slate rock, or even an area on the aquarium glass. The male and female fish will make a number of passes over a site they are spawning on, and will then guard their eggs.

Unfortunately, in many cases the pair will eat their spawn. If this is the case, removing the spawn and placing it in a separate, bare bottom rearing aquarium maintained with the same water parameters as the main aquarium is recommended.

The eggs start to wriggle after a few days, and 48 to 72 hours later the fry become free swimming and are ready to be fed newly hatched live baby brine shrimp. Filtration is best provided by an air pump driven sponge filter. Angelfish tend to have large spawns, so small partial water changes every two days will be necessary. Two to three feedings per day of live baby brine shrimp is recommended, and within a couple of weeks fine crushed flake food can be offered while the feeding of live brine shrimp is gradually diminished.

If you have never kept angelfish and enjoy tropical fishkeeping, do yourself a favor and set up a nicely planted tank and get some. They are rich in character and loaded with interesting behaviours – it is truly a fish deserving of its name.