Just because you’re a fish, it doesn’t mean you have to be a good swimmer. It’s nice to be elegant, but much more important to be a survivor, especially if you live on the edge of a very extreme habitat.

Imagine you’re a small, lightweight creature living in rocky rubble close to some of the most powerful rapids on the planet. Life is good. The clean warm water is agitated and rich in oxygen. Your environment is full of rocky hiding and resting places where the current doesn’t make you spend every moment fighting just to stay in place. Food comes to you with the flowing water.

The rapids have thundered for untold lengths of time though. They’re like how an eternal, never resting hurricane would be for a human. For a fish hanging on at the edges of such a perpetual storm, it’s best to stay low and avoid getting swept away.

In the case of the bottom hopping buffalo head (Steatocranus spp. and Teleogramma) cichlids of the Congo River, long evolution in these conditions has led to reduced swim bladders, the gas bags filled from the intestines and situated on each side of a fish to give it buoyancy. With tiny swim bladders, these fish sink where fish from softer worlds glide. This allows them to survive – better swimmers could get caught in the rush and carried to great dark depths where there is no oxygen and no chance of survival.

Interestingly, the force and violence of the rapids has worked like a series of walls for these small cichlids. It’s beginning to look like many major rapids have a different form of these fish living upstream from the deepest torrents. The isolation created by the ‘death zones’ has allowed for the development of new species along the river. We aren’t sure how many forms will be found – it’s an opportunity for aquarists looking to add to their knowledge of cichlids to learn and share new information amongst themselves. 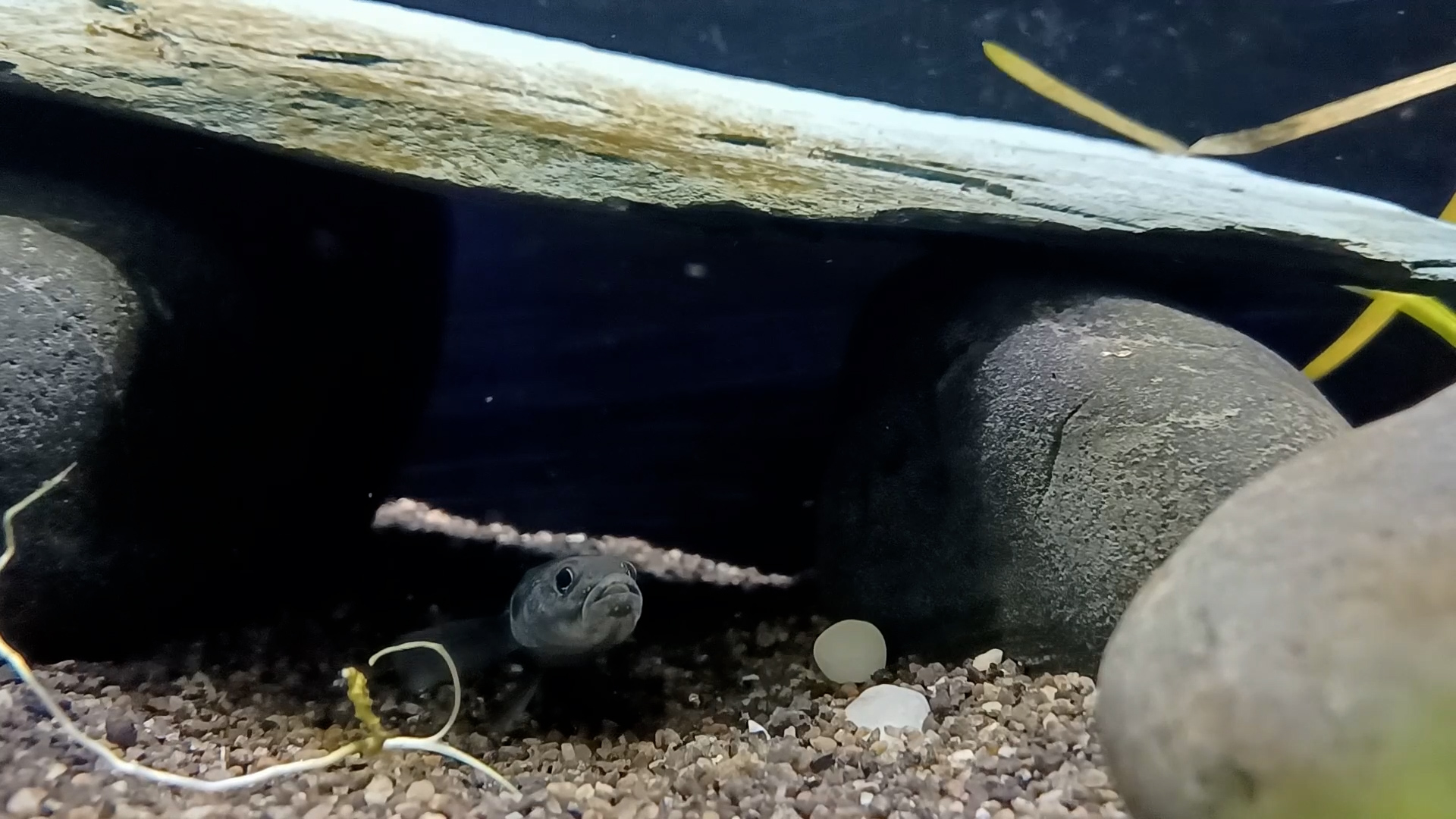 In the short term, it leaves us with a fascinating bunch of oddly shaped, hopping fish, many of which have not yet been scientifically named or studied. Where do we start?

They do best in tanks of at least 3’ / 1 m in length. The bottom should be fine gravel or sand, as the fish like to dig. The tank should have warm water, around 78°F / 26°C, and should be massively overfiltered or equipped with powerheads. This isn’t a question of their sensitivity to water conditions – they are fairly tough. Biofiltration is always a goal, but rushing water is a need for these creatures. They may not willingly venture into the wildest parts of the rapids, but their homes are still quick changing spots.

There should be rocks set up to provide hiding and resting places, including flat rocks they can safely dig under. And right about there, we can stop generalizing…

One member of the group, Steatocranus casuarius, has managed to gain a foothold in the hobby. If you have access to a quality aquarium store, you’ll probably get to see them some day. Mostly likely, they’ll appear in the form of a dark grey bulbous head sticking out of a small cave, watching you grumpily.

Bring them home to a properly set up tank, and they’ll hop all over, chasing each other. While I wouldn’t keep them in a standard community, they will do well with current loving fish like Congo Tetras. It’s important to avoid other bottom loving cichlids from other regions, as they are territorial. Other bottom hopping Congo cichlids seem fine together, with a proper current and lots of territory possibilities. Keeping these fish makes you a person who looks at the aquascaping possibilities of rocks when you walk in clean places. You need a good collection to have properly set up tanks.

Kept in slow moving, semi-stagnant aquariums, they be slow moving, semi-stagnant fish. They need the oxygen moving water supplies to act naturally. They also depend on the current for ease of movement, given their reduced swim bladders and lack of buoyancy. In the right conditions, they are very active, and if they vanish from sight, it’s probably because they’ve laid eggs in a carefully guarded cave.

They are fantastic parents. Like most cichlids (the exception is the colorful but boring to watch Lake Malawi Mbuna mouthbrooders), their care for their fry is one of the greatest shows in the aquarium world. 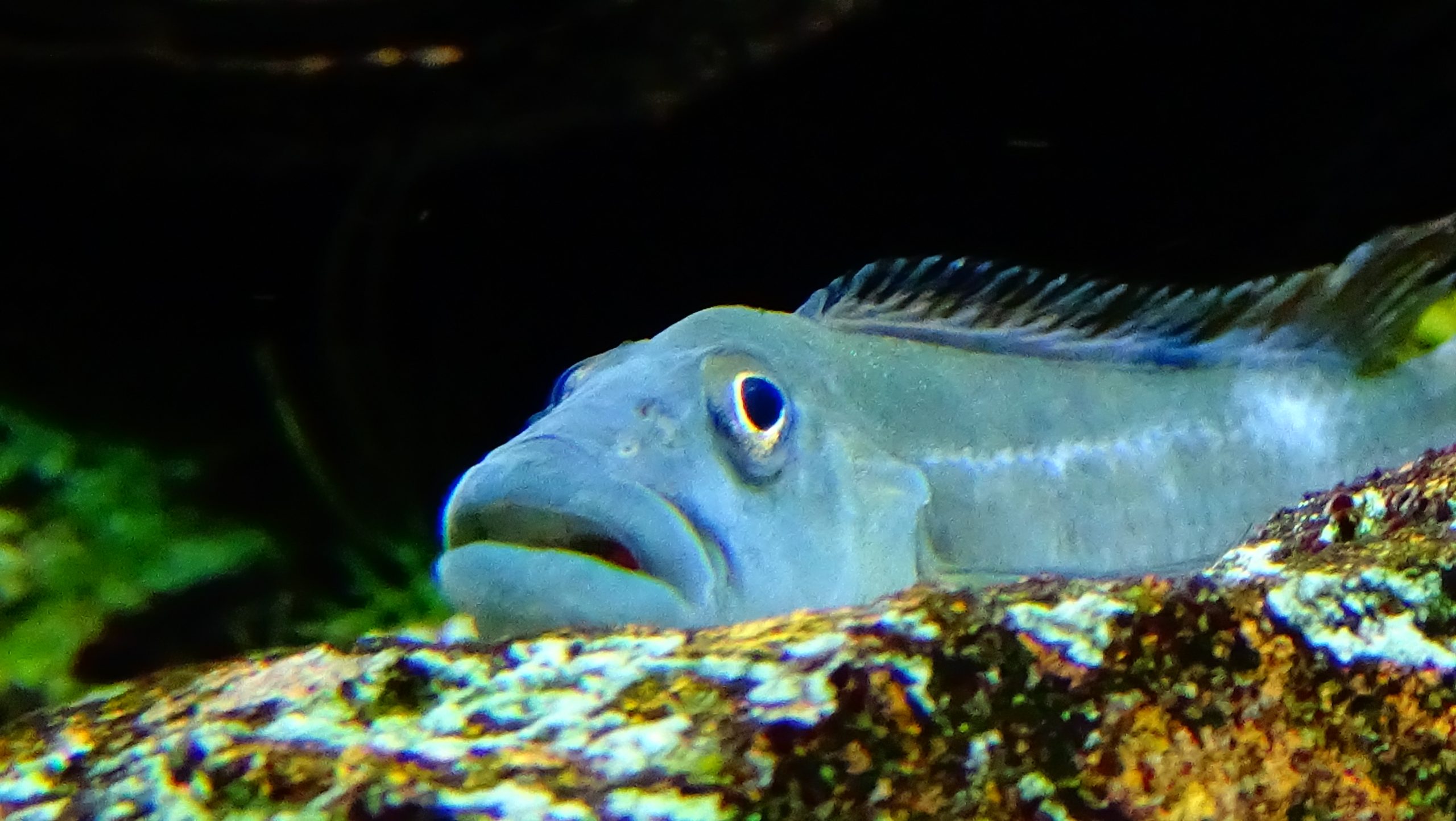 Their taste in foods can be very sophisticated. Some members of the broader Buffalo Head group of species are fantastic escargot chefs. They prepare their meal by poking a hole in the shell of the snail, then slurping it out. Some Buffalo Head types are less fancy and use their noteworthy jaws to crush the shells of their favorite prey. I had one individual fish that liked to pile up empty shells by the door of his cave, stacked in neat little pyramids. They’re a good fish to have around at Halloween.

If you love your snails, these are not the fish for you. But when they aren’t dining on delicacies, they are very easy to feed on standard flakes and pellets. Feeding time is a frenzy of semi-competent swimming, and they always manage to get their food in the current, even if they look like seals launching off a rock while they’re doing it.

Along with S. casuarius, there are other species that occasionally make an appearance when fish are shipped out of the Democratic Republic of Congo. One of the sad side effects of the strange habit aquarists have of thinking all “African cichlids” come from 2 or 3 lakes in a vast and species rich continent is that imports of African cichlids from other regions are limited by the small market for them. Fish this weird should have a better following!

Two of the more interesting species are undescribed fish with no scientific name. Species “Red Eye” is an imposing little fish, with an angular heavy body that rises in a line from the tail to the steep forehead, massive snail crushing jaws and strange scarlet eyes.

Species “Brown Pearl” is a small headed species with lovely blue eyes. They colony breed – succeeding broods take part in the care of younger siblings as they hatch. You can end up with a “village of fish”, just as you can with some of the better known Lake Tanganyikan Cichlids.

The tinanti group are Steatocranus with large heads and lips, with slender bodies behind them. They have a distinctly muppet like style to them. Behaviorally, they are like their heavier bodied relatives. I have found them to be more aggressive, although they are generally harmless. 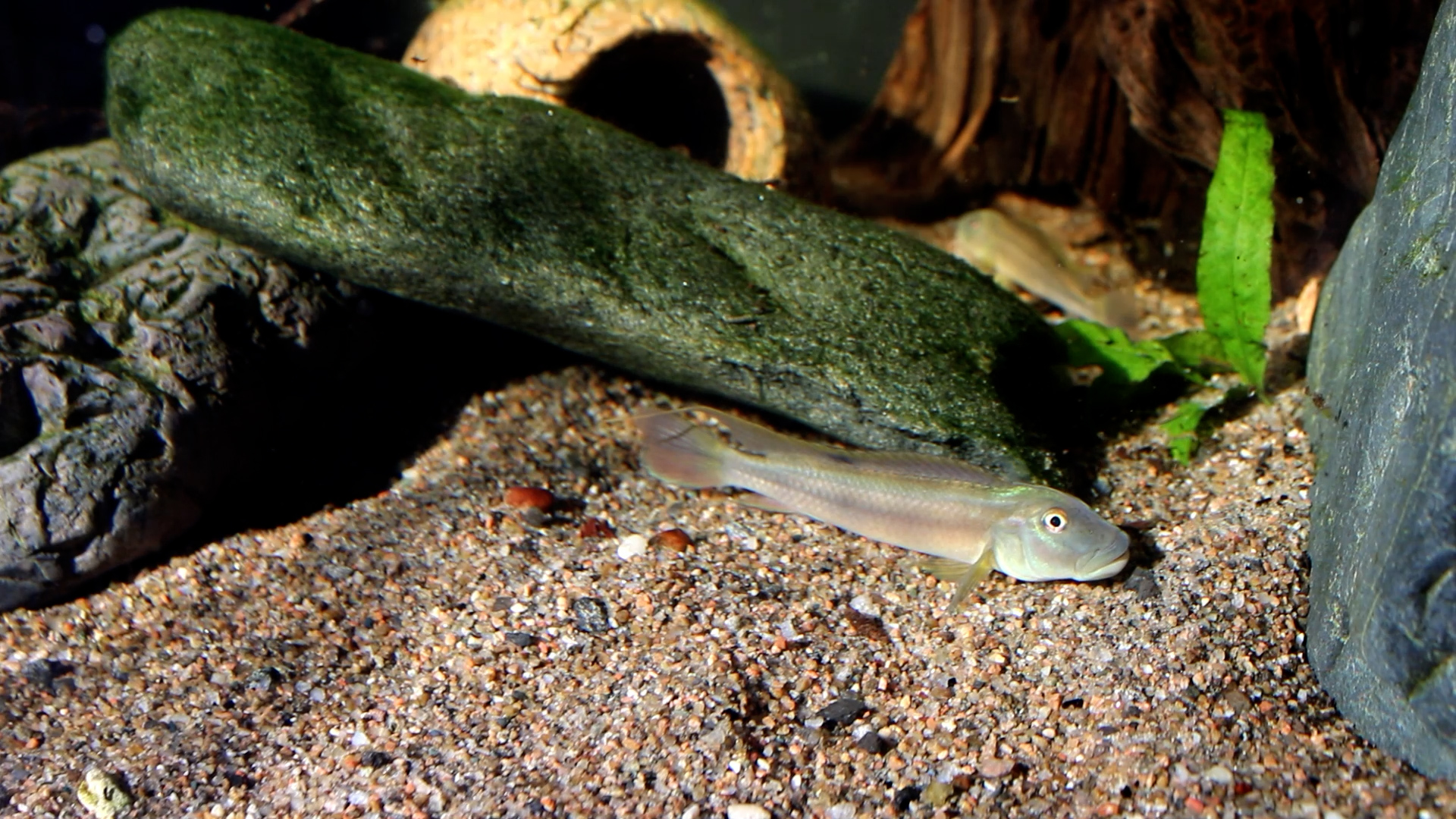 They don’t seem to mean the world well, and they would probably like to beat up or kill every fish in with them. They try hard. They fail. Their reduced swim bladders make them the worst swimmers in the tank. Watching them angrily pursue tankmates is kind of comical, although it would be rude to laugh too much. It just doesn’t work, and they usually figure it out. They still try sometimes, but while they won’t admit defeat, they eventually recognize it.

The cichlid genus Teleogramma is smaller than Steatocranus currently seems to be, but it has more traditionally beautiful fish in it. Female Teleogramma brichardi, the most common of these very rare fish, have white lined fins, black bodies and glowing pink/red bellies. With their dragon like shape, they are very cool.

They are very slender and flattened fish – clearly residents of fast water, adapted to allow a flow to pass over them. They have the same reduced swim bladders as Steatocranus, but their overall look is more snakelike, and more like I would imagine dragons to be.

They can be shy, but less so in a good flow. Their history in the hobby is as a group (or just T. brichardi) often pictured and discussed in books and sites dedicated to more curious fishkeepers, but rarely seen. In a more adventurous hobby, they are fish you might expect in independent stores. In our conservative, central purchasing hobby, great fish like this are often overlooked and no longer regularly available except from specialty dealers.

Hopefully, people who set out to find uncommon cichlid groups and species will be able to stumble across some of these weird fish. I hope they won’t just be fish you see in videos or read about in articles, and that they’ll become the same sources of learning and enjoyment for you that they have been for me.