DO ALL PLECOS EAT ALGAE?

Plecostomus belong to the family of suckermouth catfish: in more exact terms, the family Loricariidae, commonly grouped together under the name Plecos. The Common Pleco, Hypostomus plecostomus, is the fish that is most often purchased and referred to as the “janitor fish”.

Typically seen in most fish shops are “Pleco” specimens of a few inches in length. Little do many know that these fish max out at over a foot in length and will require at least a 75 to 100 gallon aquarium to be comfortable in over their relatively long lifespans of 10 to 15 years. Even more concerning is that many of these fish end up perishing due to the fact that they are not properly fed, based largely on the misconception that they will somehow survive on algae and unwanted waste. In reality, this could not be further from the truth. 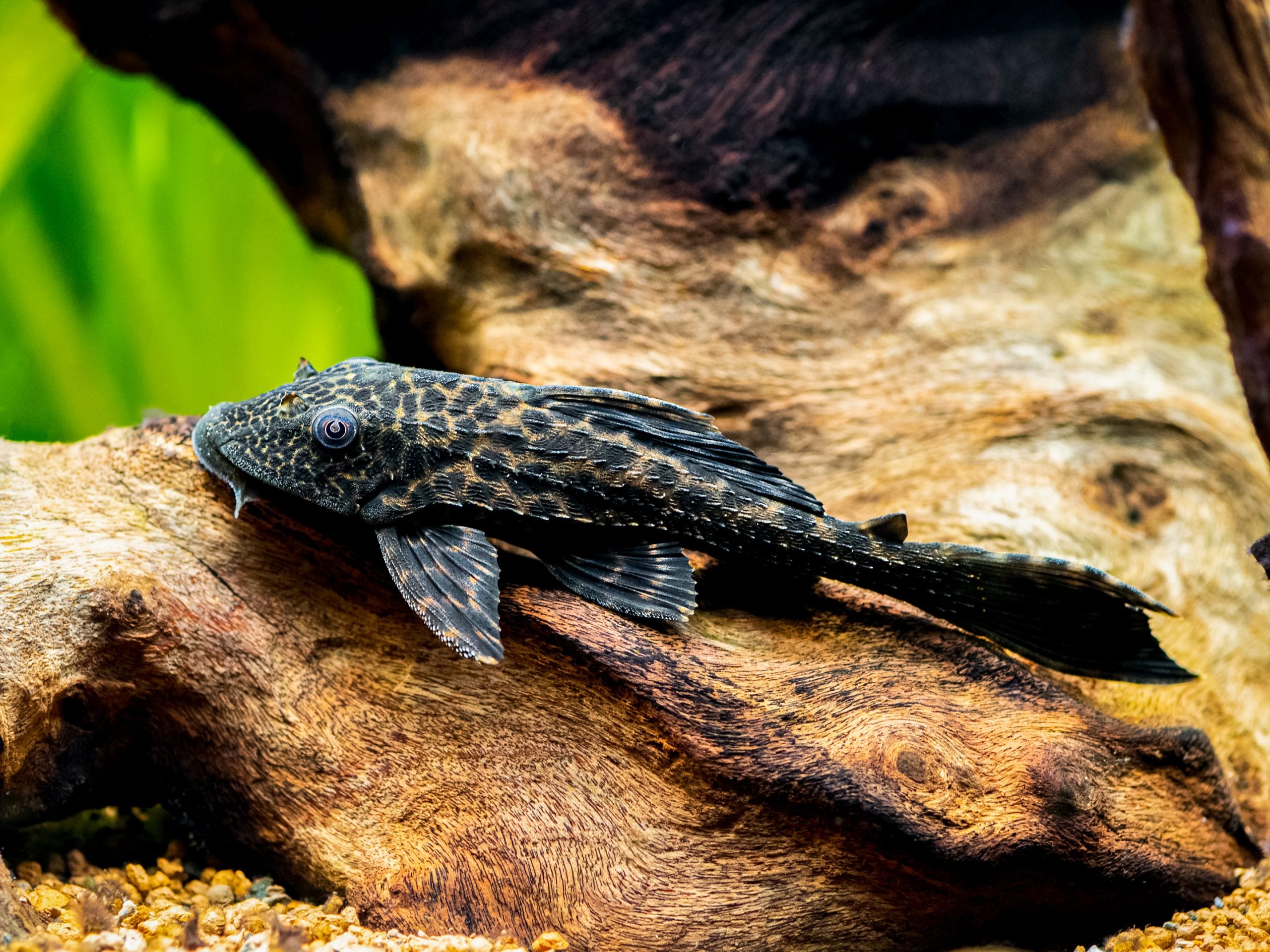 The fact that Loricariidae have sucker-shaped mouths is a result of the type of environment they have evolved within: faster moving rivers and streams where the need to securely support themselves is mandatory. It is not reflective of their diet, even though a number of species do consume wood and use their powerful mouths when rasping the outer surface of submerged trees and branches.

The family Loricariidae originates exclusively from Central and South America. Currently, there are over 680 species and 92 genera, representing a large variety of different suckermouth catfish. It is important to understand the individual needs of the species you choose to keep!

With such a proliferation of newly discovered species of suckermouth catfish within the family Loricariidae, new discoveries are given an L-number to help provide temporary identification to the ever-growing list awaiting a proper name.

The popularity of this interesting group of catfish has exploded over the past decade. With so many new discoveries, there are many species to keep and learn about, as well as take on the challenge of breeding recently imported wild fish. We support the efforts of serious fish breeders: given the alarming rate of destruction of key ecosystems around the world, the need for captive populations is very important.

Suckermouth catfish can be classified as omnivores: most species are opportunistic feeders that will readily feed on dead fish and various invertebrates just as soon as they would algae or other aquatic vegetation. Regular feeding with sinking tablets that contain a good inclusion of spirulina as well as insect and fish protein, in addition to ingredients that provide them with fiber, is recommended. Nothing beats fresh food – a weekly treat that includes a slice of zucchini or cucumber attached to a rock is a good way to vary their diet. Securing the vegetable to a rock will ensure it remains at the bottom while also adding stability so the fish can rasp away at it as it prefers to do. 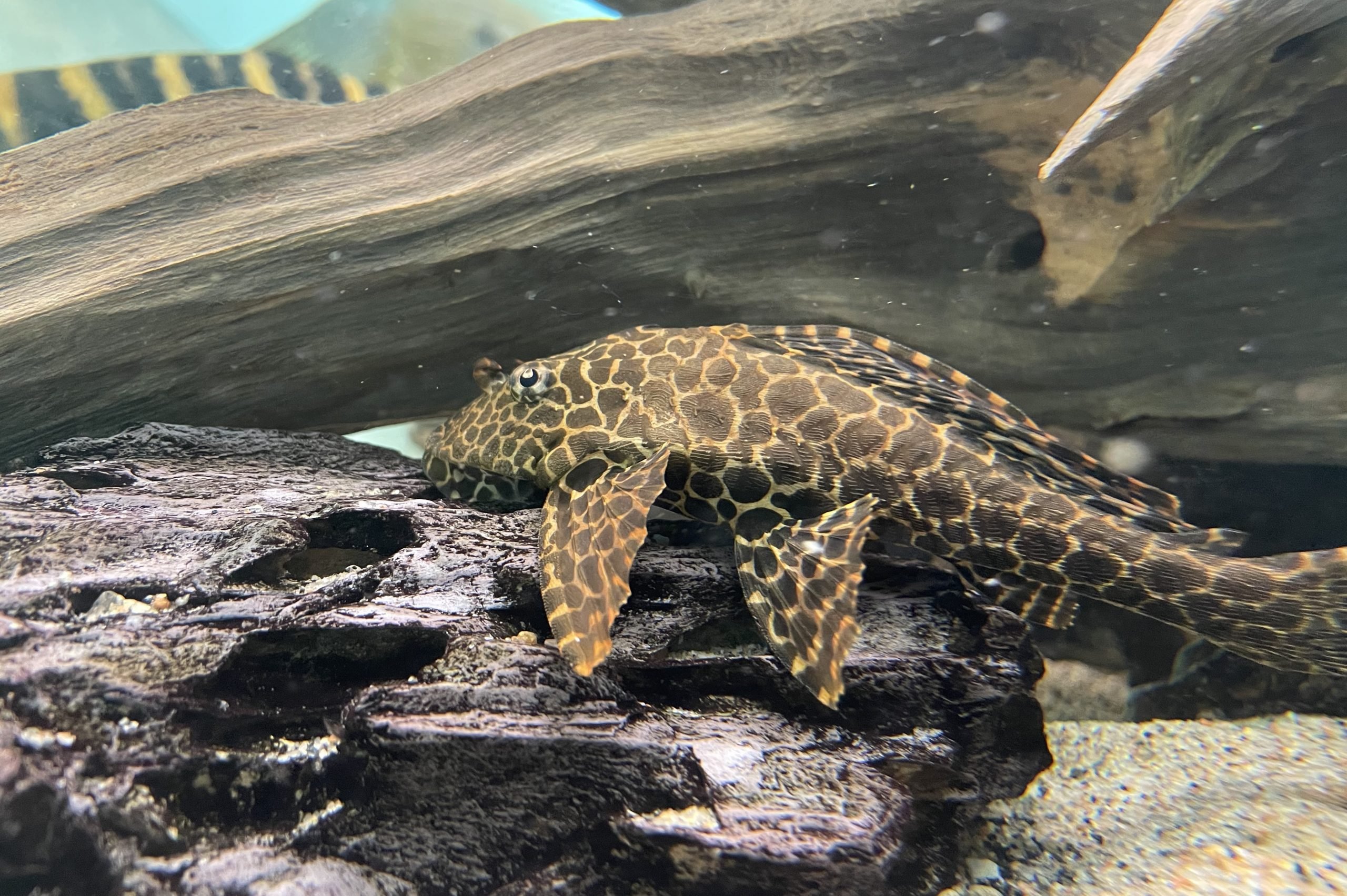 In general, with most species of suckermouths, providing some dense / hard driftwood is important, as it ensures they consume the wood they need and provides them with a natural type of surface they actively seek out in the wild.

An example of a very carnivorous species of suckermouth is Leporacanthicus galaxias (L240), commonly known as the Vampire Pleco. This sharp-looking black fish with white dots all over it features two impressively large fangs. Its diet should consist of animal protein such as bloodworms, krill, shrimp and assorted protein-rich tablets, sticks or pellets. In the wild this fish uses its fangs to empty the shells of snails and mussels.

A good example of a suckermouth with a very different diet is the Royal Pleco, Panaque nigrolineatus, a species that actively consumes wood and much prefers a vegetable-based diet. The Royal Pleco originates from the Orinoco, a huge river system that separates Colombia from Venezuela, which I had the much-appreciated opportunity to navigate as we forged our way through a Fluval expedition. You can watch a video all about this incredible expedition here: https://youtu.be/NpabwL_Ko5E. The Royal Pleco requires a regular supply of fresh vegetables in its diet, including zucchini, cucumber, peas and lettuce. Bug Bites Bottom Feeder Formula is an excellent daily diet to include, along with the fresh foods mentioned!

All members of the Loricariidae family share both a suckermouth and a well armored body, providing these fish with effective protection against many predators and making them very suitable for the type of aquatic environment they typically inhabit. Most species are active during evening hours: in community aquariums, this means they can aggravate and disturb other fish species that often rest on the bottom or within structure when the lights are off at night. Suckermouth cats actively feed in the dark, so it’s best to feed them after the lights have shut off. Dropping a few tablets or some pellets into the aquarium at that time will ensure they feed properly, while preventing other species from getting to the food before the suckermouths can. For all of these species, regular partial water changes are very important to support peak form. Ensuring the substrate is kept clean and organic waste is exported out of the filter and the aquarium during regular partial water changes is paramount to long-term health. Contrary to what too many think, suckermouth catfish are not “janitor fish” that help keep the aquarium clean – in fact, it is the aquarium keeper who acts as the true aquatic custodian. 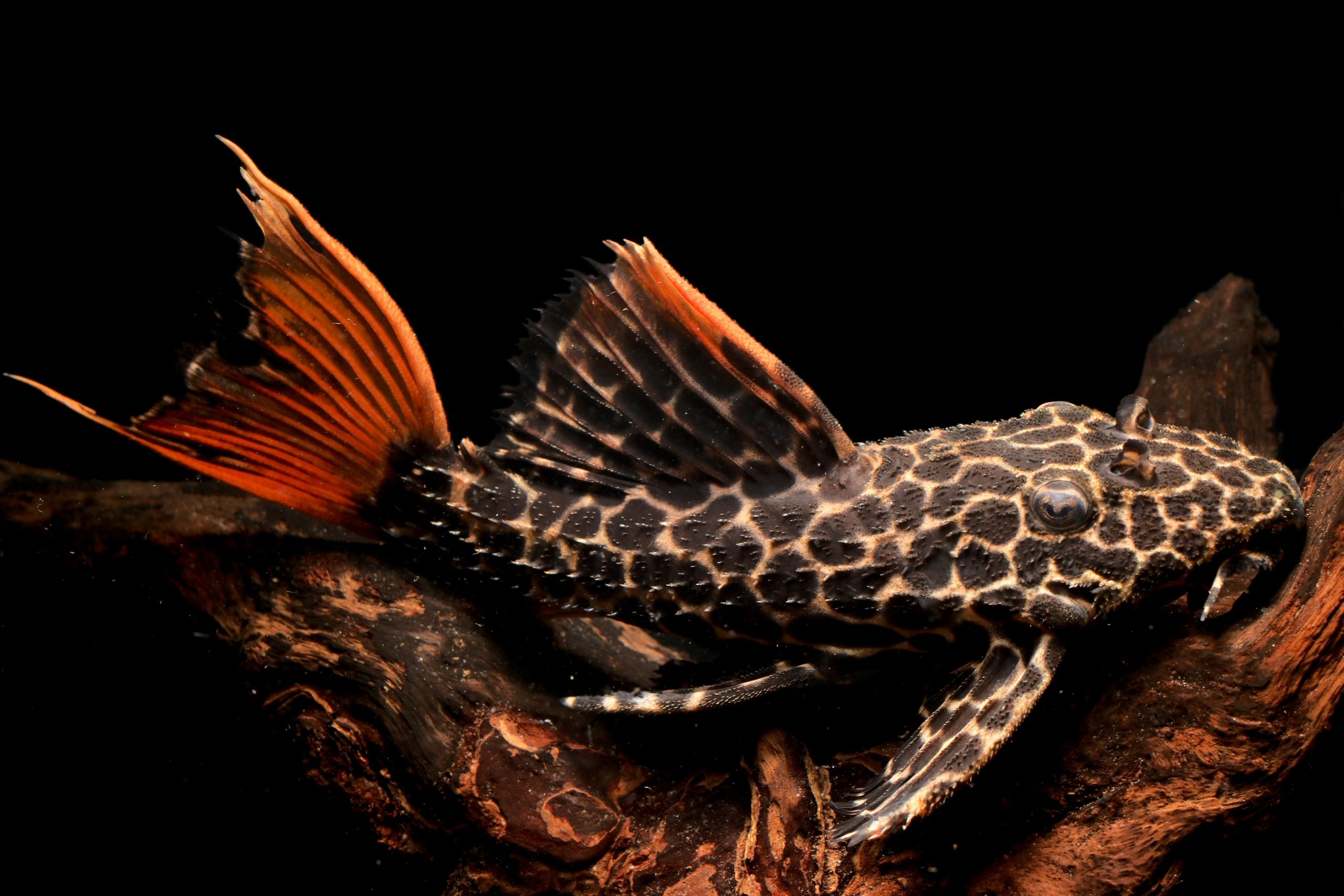 Suckermouth catfish are a very interesting family of fish, and setting up a specific aquarium for them is great fun. It is important to remember that many of the most attractive species, such as the Redfin Leopard Plecostomus (Pseudacanthicus leopardus) easily attain a foot in length in an aquarium. For a few fish of this size, an aquarium with a footprint of at least 180 x 60 cm is best. Suckermouth catfish spend most of their time on the bottom of the tank, so the height of the aquarium is less important.

The ideal setup would normally involve décor such as smooth rocks and driftwood, and plenty of water movement. Be sure to provide current both at the surface, to support necessary oxygen levels, and throughout the aquarium, to provide a natural environment. With proper attention to both the conditioning of the fish and their environment, having them spawn is possible and would rank as a true aquatic achievement.

All of us who enjoy keeping tropical fish owe it to ourselves to learn about and keep the fascinating, often-misunderstood family of suckermouth catfish!